The 2015 update of the Cochrane review includes new studies, but the message remains the same. For every 100 children given antibiotics there will be five extra children free from pain at 2-3 days compared to seven extra who develop diarrhoea, vomiting or rash. For more details click here.

The Cochrane Airways review on Vitamin D for asthma has been the subject of considerable interest from the press including the BBC Online, Guardian and the NHS ‘Behind the Headlines’.

Vitamin D reduced the risk of emergency department visits or hospitalisation for asthma from 6% to 3% over six to twelve months, and also reduced the risk of less serious asthma attacks from 29% to 18%. These results are illustrated in the Cates plots shown below:

People with an asthma attacks leading to ED visit or hospitalisation 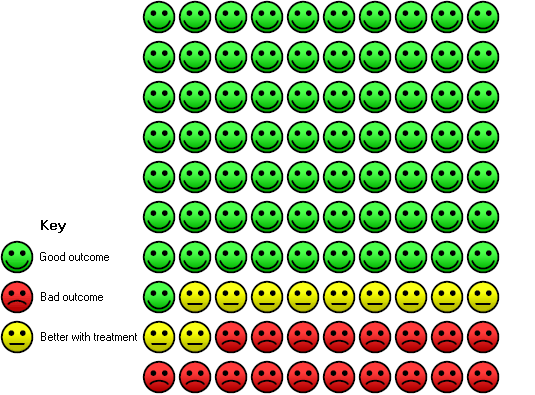 For full details of the review please follow this link. The evidence from children is still rather limited and we do not know for sure what dose of Vitamin D is needed or what blood level of Vitamin D determines whether people benefit. Vitamin D is not a substitute for normal preventer treatment.

There is an interesting example of a network meta-analysis that was published by Loymans and colleagues in the BMJ in May 2014 (Loymans RJB, Gemperli A, Cohen J, Rubinstein SM, Sterk PJ, Reddel HK, et al. Comparative effectiveness of long term drug treatment strategies to prevent asthma exacerbations: network meta-analysis. BMJ2014; 348: g3009). http://www.bmj.com/content/348/bmj.g3009

In an accompanying editorial at http://www.bmj.com/content/348/bmj.g3148, I have outlined how the network meta-analysis combines evidence from the included randomised trials of maintenance treatments for adults with asthma.

The strength (and weakness) of the network approach is that treatment effects estimated from the direct randomised comparisons within each trial are combined with indirect non-randomised comparisons of the treatment effects between the trials. Although the authors tested the consistency of the direct and indirect comparisons, the power to find inconsistency is low when there is only a small amount of direct evidence. This is pointed out by the authors and demonstrated by the wide confidence intervals in Figures 5 and 6. Note that these figures are on a log scale, so 2 on the scale represents a Rate Ratio(RR) of e2, which is equivalent to RR = 7.39!

The problem is that indirect comparisons are subject to potential confounding by differences between the participants, outcome measurements and trial designs between the individual trials. This assumption is that the patients are similar enough that it would be reasonable to assume that they could been found with equal likelihood in any of the trials? The technical term for this is a “transitivity assumption”.

One way to assess whether the network meets this transitivity assumption is to look at the asthma exacerbation (attack) rates across both arms of each of the trials to see if these are broadly similar. The Loymans network is very well reported and includes full documentation of the exacerbation rates in each trial in supplementary table S1. This shows considerable discrepancy between the attack rates in the different trials.

The variation in the frequency of the asthma attacks between studies causes two problems. Firstly the results cannot readily be applied in clinical practice, as the treatments have been compared in a wide variety of different severities of asthma. Secondly, since the frequency of asthma attacks is likely to be an important effect modifier when comparing the effects of the different maintenance treatments, the indirect comparisons may be confounded by this.

One example of the possible impact of such confounding is explored further in my editorial, and may explain why combination with lower dose of inhaled corticosteroids (ICS) is ranked in the network as likely to be more effective than combination therapy with higher dose ICS. In general the trials using higher dose ICS were on people who had more severe asthma and more frequent attacks (as you might expect), so this is not a fair indirect comparison of the higher and lower dose combination therapy. There was very little direct evidence comparing the high and low dose ICS combination treatments (i.e. randomised within the same trial).

Finally, it is also not too surprising that current best practice comes out as least likely to lead to withdrawal of treatment. The authors suggest that this outcome gives an indication of the safety of the asthma treatments. However, it may simply be that all the other treatments required some change for the participants. When treatments are changed we would expect some people to dislike the new inhaler for one reason or another. Again this is not really a fair comparison.

It is also a shame that the safety of the different treatments is discussed in the text without much mention of serious adverse events, which are in relegated to a supplementary table!

For a more in-depth discussion of the methodology of the network approach, you might find the following helpful: Cipriani A, Higgins JPT, Geddes JR, Salanti G. Conceptual and technical challenges in network meta-analysis.Ann Intern Med 2013; 159: 130-7.

Follow this link to the full text of an Overview of the Cochrane reviews on this topic:

Safety of regular formoterol or salmeterol in children with asthma: an overview of Cochrane reviews

Calculating Numbers Needed to Treat (NNT) may not be as straight forward as you might think! A good example of how the calculation can be quite problematic concerns the treatment of Chronic Obstructive Pulmonary Disease (COPD) with inhaled corticosteroids (ICS). The evidence from randomised trials shows that treatment with ICS increases the risk of pneumonia, whilst reducing the risk of exacerbations of COPD. The occurrence of exacerbations in the trials was more common than episodes of pneumonia, and this difference in the rate of the two conditions means that the NNT early in the trials favours treatment with ICS, but the tables appear to turn the other way after a couple of years.

To find out more have a look at the online-ahead-of-print version of a Thorax Editorial that I have written about this (due out in print in early 2013).

“Communicating Risk” is the title of a clinical review in the BMJ on June 23rd 2012. The article summarises some of the different ways in which evidence can be presented, and discusses the relative merits of using Relative Risk Reduction (RRR), Absolute Risk Reduction (ARR) and Number Needed to Treat (NNT). Within Cochrane Systematic reviews the new Summary of Findings tables are designed to take relative measures (such as Odds Ratios and Relative Risks) from systematic reviews and turn them into Absolute Risk Reductions, as the benefits and risks of a treatment can then be directly compared with each other. Visual Rx will achieve the same thing and generate a Cates plot to use pictorial evidence alongside the numbers (such as Figure 2 in the BMJ article). The Cates plots from the NPC decision aid on statins is shown for a patient with a 20% risk of a cardiovascular event over 10 years, but most Primary care computer systems will now generate a personalised risk for the patient. This is why the simple data entry screen (labelled statin calculator) has been put in the left margin of our website, so clinicians or patients can enter their own 10 year CVD risk and see how much difference taking a statin would make to them.

The BMJ article also discusses the use of natural frequencies and the evidence from Akl and colleagues that clinicians and patients find natural frequencies easier to understand than probabilities. Finally they also point out that those patients who use decision aids, such as those provided by the NHS National Prescribing Centre are “consistently more ready to make a decision than those receiving usual care”.

The rapid responses also make interesting reading. Akl wonders if it is time for RRR to be abandoned, and Miriam Pryke questions whether it is ever right to “endeavour to change beliefs or promote behavioural change”, rather than just present the evidence.

An article in the BMJ in February 2012 on “Shared decision making” also makes interesting reading and covers many of the same issues from a slightly different perspective, as well as featuring a Cates plot used by the Mayo clinic to explain the benefits of statins.

We cannot be sure whether or not there is any difference in safety between these combination therapies, or for that matter whether the known risks of regular salmeterol and formoterol are completely abolished by using combination therapy.

The FDA have issued a further safety warning in relation to these products in February 2010 which indicates that salmeterol and formoterol are not to be used without accompanying ICS; the warning particularly highlights safety concerns in children.