This is the question that the HPS study (1) sought to answer in 5963 adults with diabetes (aged 40 to 80 years). Previous studies on statins have included small numbers of diabetic patients, and showed results that were in keeping with the overall benefit of statins in other groups of patients. However, the wrong conclusion can be drawn if the results from a small subgroup of patients do not show a significant effect (as the confidence interval will be wide when fewer patients are included).

The HPS study was powered to reliably detect a reduction in risk of a quarter by including about 3000 diabetic patients in each arm of the study (one group receiving simvastatin 40mg daily and the other a placebo tablet). When all the patients having a first vascular event were measured over the five-year study period, the rate in the placebo group was 25.1% and in the statin group was 20.2%. This represents a relative risk of 0.76 (95% confidence interval 0.72 to 0.81) and is most unlikely to represent a chance finding (p< 0.0001).

We now have the results from a large enough study to show that statins are effective at preventing vascular events in diabetes, which supports the previous evidence that diabetics seem to derive similar benefit to other risk groups.

An advantage of the large size of the study is that sub-group analysis can be carried out. This showed that the proportional reduction in risk is largely independent of the type of diabetes, the degree of glycaemic control when the statin was started and also was not detectably altered by the lipid concentrations. The benefit with statins was similar whether the patients had a cholesterol level of greater or less than 5 mmol/L when they started on the statin. Patients derived significant benefit whether their initial cholesterol level was raised or not, and the test for difference between groups (or heterogeneity) was negative (p value of 0.7).

Once the study has shown that the relative risk is similar in all diabetics studied the issue for implementation is how much absolute benefit the patients will obtain from being given the statin treatment. This will be determined by the baseline risk of the diabetics being considered, and the rate of major vascular events over 5 years was 36% in patients with arterial disease and diabetes, and 13% in those with diabetes and no previous arterial disease. Therefore when the diabetics without pre-existing arterial disease are considered, although the relative risk is very similar the event rates are lower. In the placebo group 13.5% suffered a vascular event over 5 years, whilst 9.3% of those on simvastatin suffered a similar event. The figures for the diabetics whose pre-treatment LDL cholesterol was under 3.0 with no known occlusive arterial disease were 11.1% in the placebo group and 8.0% in the simvastatin group.

So what does this mean in practice? The writers of the paper suggest that it is time to move away from making decisions about statins for diabetic patients on the basis of their initial cholesterol level and instead look at their overall risks of vascular disease. Stopping smoking, reducing blood pressure and reducing cholesterol are all of benefit in such patients and the challenge to the health care providers is to decide how to tackle all three areas. The threshold for starting statins should be determined by overall cardiovascular risk, and the level set for treatment will need to be determined by the local health economy. I suspect that this may generate a vigorous debate.

I have used the Statin Calculator on this website with an overall risk ratio of 0.75 to generate smiley face plots of 100 patients given statins from two levels of risk and these are shown below. The largest benefit is seen in the patients with both diabetes and arterial disease (five year NNT is 12), and although the relative risk is the same in those diabetics with no arterial disease, the absolute benefit is less (five year NNT is 33). The benefits of treatment may be underestimated as 17% of patients in the placebo group took non-study statins during the course of the study. The inclusion of subsequent vascular events would also make the event rates larger and the NNT smaller. 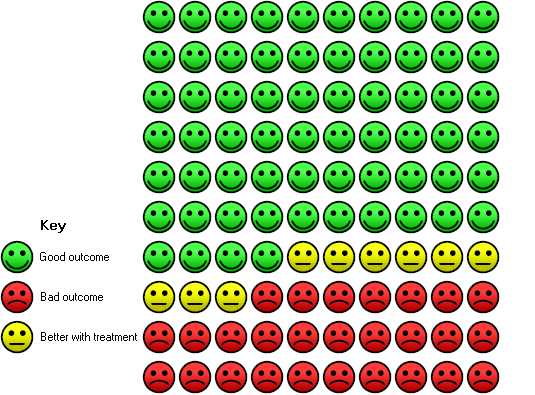 In this case 87 out of 100 patients treated with simvastatin would not have suffered a vascular event anyway (the green faces) and the 10 red faces still suffer an event in spite of the statin, but the 3 yellow faces are saved from having a vascular event. As we do not know who these 3 patients will be, all 100 have to be given the statin, meaning that the NNT is 31. In other words 31 patients from this group need to be treated to prevent one vascular event. 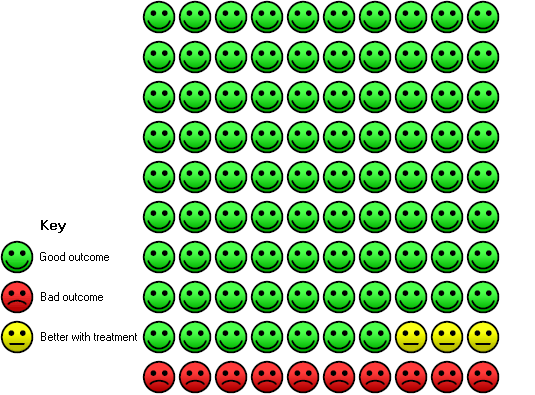 You may be wondering why the NNT is not 34, since 100 divided by 3 is 33.3 which would round up to 34. In fact the three yellow faces actually represent a drop in the treatment group risk to 9.75% (a risk difference of 3.25%), as shown in Table 1 below. The 3.25% risk difference is rounded to the three yellow faces in the Cates plot. Have a go yourself using the Statin calculator and you will see what I mean (but remember to enter 13% as the baseline risk). You should obtain a data table in Visual Rx which looks like this: