Two articles were published over the same weekend in August 2001 reporting the results of the CURE study investigating the use of clopidogrel in addition to aspirin in patients with unstable angina (1,2). The Lancet published the results from a sub-group of 2658 patients who were treated with percutaneous coronary intervention, in other words they had coronary angioplasty or stents (1). The full study of 12,562 patients was reported in the New England Journal of Medicine, so this article will concentrate on the NEJM paper (2).
Let us first notice how the newspapers reported the results of this trial. One of the Medical Newspapers for General Practitioners in the UK reported that “Treating unstable angina and non-Q wave MI with clopidogrel and aspirin resulted in a 20% reduction in the risk of MI stroke and vascular death. The risk of major bleeding increased by 1% using both anti-platelet drugs”. Similarly Medical Monitor reported that “Clopidogrel cuts MI deaths by 23% and that for every 1000 patients treated with clopidogrel, six will require a blood transfusion.”

These reports are quite misleading because they have used the Relative Risk Reduction to report benefit but the absolute difference for the adverse effects (using percentages to report the outcome in each case). The NEJM paper itself is much more balanced and gives the proportion of patients who have cardiovascular death, MI or stroke as 9.3% in the clopidogrel group and 11.4% in the placebo group. This is illustrated below using Visual Rx (4) to display these results as a picture of 100 patients at risk:

Figure 1: Cates plot showing two people out of 100 on clopidogrel are prevented from having a stroke, MI or vascular death over nine months in comparison to placebo 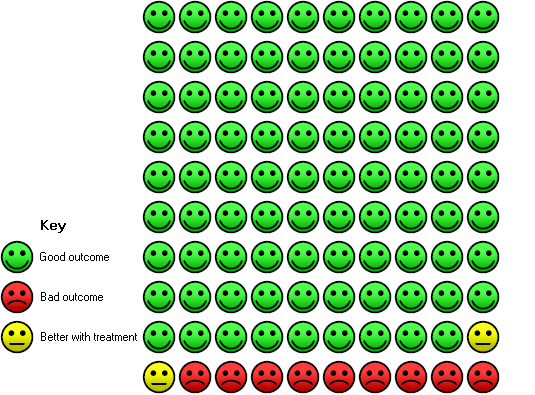 Over the course of 9 months, treating 100 patients with clopidogrel will prevent 2 cardiovascular deaths, MI or strokes, which gives a Number Needed to Treat of 48. This is shown above as two yellow faces for those who are saved by clopidogrel, whilst the nine red faces are for those who suffer these events on clopidogrel or placebo. In practice we do not know which two will benefit so all 100 patients need to be given the clopidogrel.
In the same way 2.7% of patients suffered a major bleed on placebo compared to 3.7% on Clopidogrel, a Number Needed to Harm of 100. This is illustrated below, where the 3 red faces are the 2.7% who bleed given placebo or clopidogrel, and the single crossed-out green face is the extra patient who bleeds due to the clopidogrel who would not have done so on placebo.

Figure 2: Cates plot showing one additional person out of 100 has a major bleed on clopidogrel over nine months in comparison to placebo 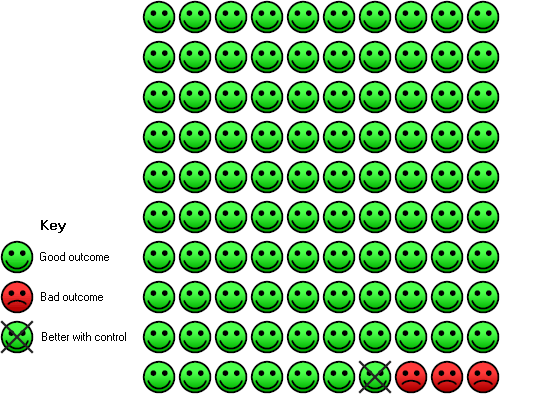 So overall after 9 months of clopidogrel treatment there is one patient suffering a major bleed for two patients saved from strokes, heart attack or cardiovascular death for each 100 patients treated. This strikes me as a more balanced summary of the benefits and risks of treatment, using the SAME statistic to describe both outcomes.This example also illustrates the importance of reporting the rates of events in both groups (as shown on the pictures), and using the differences not the relative risks. In fact the relative risk of death, MI and Stroke is 0.80 (a drop of 20%) whilst the relative risk of major bleeding is 1.38 (a rise of 38%)! These relative risks by themselves are meaningless unless the event rates on placebo are also presented. The 20% reduction reported is from a baseline rate of 11.4% in the placebo group, so the absolute difference is only around 2% of all those treated with clopidogrel. Likewise the 38% increase in bleeding is from a baseline rate of 2.7% on placebo and translates into 1% of all the patients given clopidogrel.
Finally these patients had unstable angina and would have higher cardiovascular risks than patients with stable angina. It may be therefore that in stable angina clopidogrel could cause more bleeding events than heart attacks and strokes prevented.