In 2000 my senior partner presented the results of a paper published in the Lancet (1)comparing the standard combined oestrogen and progesterone method (Yuzpe) for post-coital contraception with two doses of progesterone (levonorgestrel) only. Until then women to take large numbers of tablets, but a formulation in two single tablets had become available in the UK (Levonelle-2). The comparison was quite clear cut: less vomiting following the progesterone only regimen and also less pregnancies.

I decided to check this out further on the Cochrane Library and found a review covering emergency contraception which was updated in March 1999. The review found two randomised controlled trials which compared levonorgestrel and Yuzpe (including the WHO study in the Lancet). These Pooled results are displayed graphically below as Cates plots using Visual Rx (version 4). In this case Yuzpe and levonorgestrel have been compared and the graphical displays represent 100 patients who are treated.

Figure 1 demonstrates the pregnancy rates; the green faces are patients who do not fall pregnant whichever regimen they receive, and the one red patient will fall pregnant anyway. The single yellow face represents a patient would be pregnant if given Yuzpe but not with levonorgestrel. This represents a Number Needed to treat of 63 (95%CI 45-193) with progesterone only compared to Yuzpe to prevent one extra pregnancy.

Figure 2 looks at the numbers of patients who will vomit; again the green faces will not be sick with either treatment, and the red ones are sick with both. Here the 14 yellow faces will be patients who do not vomit with levonorgestrel but would have done so with Yuzpe. The Number Needed to Treat is 7 (95% CI 7-8) to prevent one patient vomiting.

Although the new treatment was more expensive we estimated that switching to levonorgestrel should save between one and two pregnancies in one hundred patients attending for post-coital contraception. The extra cost of levonorgestrel was about £200 per pregnancy prevented as it was more expensive than Yuzpe in the UK, but in France it was already available to patients directly from the chemist. For us the extra prescribing cost compared well with the alternative cost and inconvenience of terminations of pregnancy!

We abandoned Yuzpe in our practice and switched to levonorgestrel instead. The only unhappy member of the practice team is one of my other partners who had the topic lined up for her own presentation a few weeks later and had to find a new topic to present! 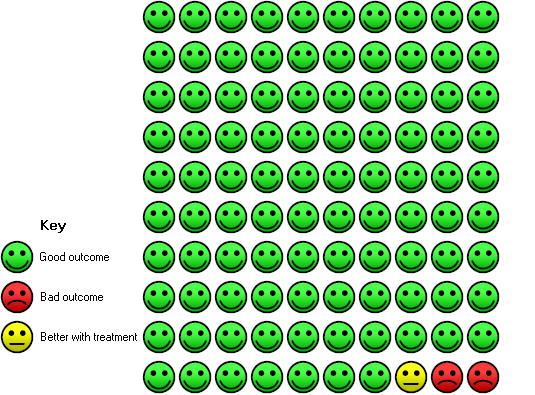